Acupuncture and Chinese Medicine – Healthcare On The Go

by Rita on January 15, 2018 in Blog
I love Xmas and New Year, primarily because I always travel – usually around Asia – and miss the worst of winter completely! It’s part of my work/life balance promise to myself. My patients are incredibly understanding for which I am eternally grateful.
It’s not all fun in the sun as I also take the opportunity to either do some further professional training in Chinese Medicine, volunteer providing acupuncture to people who would otherwise not have access to any healthcare or as I did this year, discuss potential collaborations with other healthcare charities and NGO’s. This year I spent 6 days in Kolkata, India with an amazing western medicine NGO called Calcutta Rescue. They work with the poorest and most deprived people in Kolkata. Those who live in abject poverty, have little or no education, and suffer from very serious health conditions such as TB, HIV and diabetes, Hopefully we will be able to work alongside them providing acupuncture in the near future.
I love Asia as it offers so much and this year I’ve been in Thailand and Laos, travelling and meeting up with friends. I always carry my needles with me and often have need to use them on myself, and others. Particularly useful for stomach problems in this part of the world.  I’m quite a useful friend to have around!
The weather has been erratic, the pollution considerable and we’ve been in and out of air-con which has led to chesty coughs that don’t easily shift.
One friend who lives in Bangkok has been badly affected and she was already run down so her cough developed and became particularly nasty. I needled her to expel the virus and support her lungs which improved some of the symptoms but then she developed a fever of 38.9. She felt very weak indeed and coughing was wearing her out. She felt too weak even to eat.
I needed to get her fever down so I used Guasha. Guasha is often performed with a thin but soft edged tool which is used to ‘scrape the skin’. Sounds awful doesn’t it? And actually looks worse than cupping! It can be mildly uncomfortable to have, but the results are significant. I worked around neck, between the shoulder blades and across the chest.  It works to bring blood to the surface of the skin that sets off an inflammatory response which then serves to heal the area. It also brings down fever. 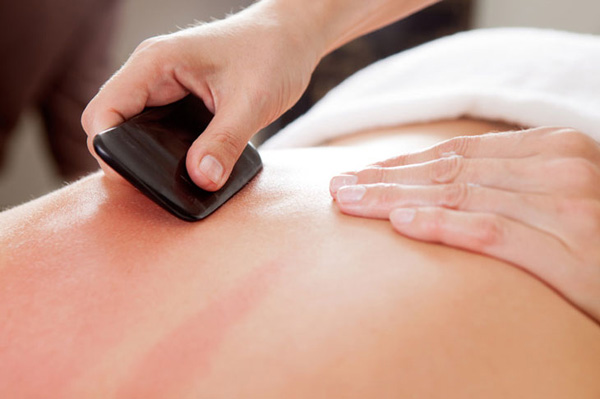 Guasha tool
Within an hour her temperature was down and a short time later, it had returned to normal. She was able to eat and although still weak, she was on the mend.
I often treat the people I meet when travelling – I never charge. It’s wonderful to see them realise how effective it is and go back to their home countries eager to start treatment, often for conditions they’ve lived with for far too long.
For me one of the great joys of Chinese medicine is that it’s so versatile. I can treat pretty much any health conditions at some level – to relieve or eliminate symptoms, boost immunity and reduce pain – and my little bag of tricks is pretty much all I need.
While in Kolkata, I showed the doctors there my pouch containing acupuncture needles and told them I could do hundreds of treatments with just that bag, pretty much anywhere, in almost any conditions. They couldn’t quite believe it!
I always come back having learned something to add to my Practice and therefore support my patients better.
Tweet